It was a beautiful cool morning which is perfect for tracking. All competitors met at 7:00 am. for the draw in Parking Lot 1 at the University of Calgary. We had one lady who had to pull her entry as she suffered an injury which required surgery and therefore she was unable to make it. We wish her a speedy recovery and hope to see her next year. 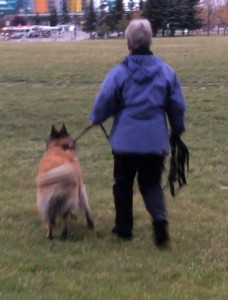 The first dog up was a Belgian Shepherd female called Allie (CH Synedockes Symphony Allegro, RE, CD, TD, CGN) owned by Marilee Irwin and handled and trained by her as well. They drew track number 1 and it was a lovely start and first corner, until Allie encountered a bunny rabbit and just could not get her head back in the game for over 2 minutes. The judge called the track and then allowed her to get her dog back on track and off they went to the first article, then a corner and then down to their last article. A lot of potential in this tracking dog – when she tracks she is brilliant. Just needs more experience on the track and I have no doubt she will get there and be a very successful tracking dog. 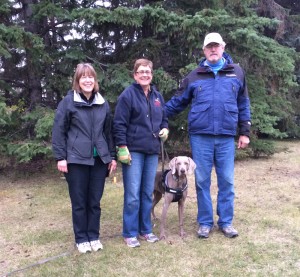 The next dog up was a Weimaraner female called El (CH Koping Element of Surprise, TD, RN. AGNJS, AGNS, CGN) owned by Pat Solkshinitz and Pat Kopec and handled and trained by Pat Solkshinitz. I am pleased to say that they passed on a beautiful example of what tracking an urban track is suppose to be about. They drew track 2 and from start to finish it was picture perfect. Completed the track in 8 minutes. WOW!!! Very nice tracking dog. Can’t wait to see her track a UTDX track next year. 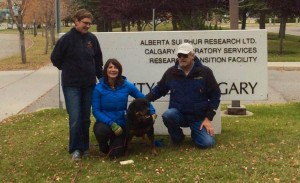 our only Rottweiler entry but this old dog was successful the day before at the Alberta Kennel Club’s urban tracking test and earned his UTDX that he pulled from the RCC test the next day as he had nothing left to provide (and gave our tracklayer the opportunity to sleep in – but thank you Gloria for being available if we needed you). By earning the UTDX, this gave Logan his TCh at the tender age of 12 years and 5 months old. Logan is the first Rottweiler in Canada to earn a CKC TCh. This TCh makes Logan a quadruple Champion!!! TCh, OTCH, Am/Can CH Maplemor’s ARU The One v Evrmor, BH, BST, SCH3, FH1, TR1, HA, RE, DDX … (and too many other titles to list. The UTDX was Logan’s 43rd working title). Logan is owned, loved, handled and trained in all sports (but Schutzhund, except for his TR1) by his owner, Gwen Haynes.

I wish to thank the Alberta Kennel Club for joining forces again for another successful urban tracking test. I want to personally thank Pat Solkshinitz for all her very hard work and dedication to this trial and this sport of tracking. Without her these trials would not have happened. She organized the tracklayers and made sure everyone was where they needed to be. I want to thank Barb Burgess for laying the two UTD tracks for our club on the Sunday. This was her first time laying urban tracks and she did a bang up job. And last but not least, to our judge, Ed Presnall, thank you for your love and dedication to this sport of tracking. You are a very kind man who always encourages the competitors. You lay very honest and challenging tracks. Your time and effort you put into plotting is commendable. Always enjoy your stories and we look forward to next year when we can also host you for a seminar.

There will be a report from the judge to follow (which will detail out the tracks and some nice pictures too.

As always, it is a pleasure to return to Calgary to judge. The weekend of September 27/28 was again a combined test weekend for the Alberta Kennel Club and the Rottweiler Club of Canada. A week or so before the tests a early snowstorm downed trees and branches across Calgary. The campus was especially hard hit and many areas normally used for tracks were inaccessible due to either workers cleaning up the damage or the damage itself blocking access. My congratulations to the Clubs for another series of well prepared tests. The tracklayers were a pleasure to work with.

Weimaraner (B). Very nice start routine and calming techniques at the scent pad. Nose down tracking down the first 175 meter leg and a crisp hard surface turn to the right, within inches of where the turn was plotted, and down the second leg. Excellent line handling skills by the handler. Sadly I watched the dog indicate the article with a brisk head twist and continue down the 90 meter leg. After making a textbook turn to the left, I was forced to call the team back as the handler did not see the article indication and walked over the intermediate article. This teamwork and drive of this team assures me that they will pass at their next test.

Belgian Shepherd (B). This team did not have a start routine. Choosing to simply race to the start flag and continue on. The dog completed the 80 meter start leg and strongly indicated the corner, but the handler did not follow. Soon, the dog chose another direction and the handler did follow. Unfortunately, the dog chose four other directions over the next 40 meters and the handler followed each time. After the whistle, the team was put back on the track and never really had the confidence to stay on the track. I spoke with the handler after the test and gave several pointers I thought might help only to be informed that that either her dog did not like that method or her trainer did not train that way.

I’ve watched this team for several years and it was nice to see how calm and prepared the handler was for this try at the title. Very slow and methodical start routine. The dog was calm and ready to track in the cool morning temperatures. Down the first leg for 90 meters to a left turn. The dog indicated the corner, yet the handler, “started thinking” and managed to convince the dog to cross a road instead of making the left corner. Once across the road, the dog told her it was not there and she was saved from “thinking” by a automobile turning next to her. The dog returned across the road to the track and through the corner, moving down the 190 meter leg. After 100 meters the dog dropped on an article and looked back as if to say “told ya it went this way!”. Continuing on the dog made an early turn to the right and crossed a road, almost immediately returning to the track to continue on. Ten meters later he turned right, crossed the road, a strip of grass, through a mulch flower bed, over a berm and entered a parking lot. After 60 meters of asphalt he turned left and trotted to an article 45 meters ahead. Restarting, he crossed the remainder of the parking lot and turned right on a grass island. This leg was 185 meters and after 170 meters the handler “started thinking”. Actually any of you that have been in her situation have most likely done the same thing. You have two articles in your pocket and you start to think about passing and forget to watch your dog. In this case the dog knew exactly where he was going and was willing to get there either exactly on the track or by convincing the handler that it was “close” to the track to keep her moving. After a few tense moments of wondering whether she would listen to him, he negotiated the final 50 meters and dropped on the final article and she dropped to her knees.

German Shepherd (B). Nice slow start routine and a brisk march down the 85 meter leg. The dog stopped on the corner yet the handler kept moving forward, effectively pushing the dog through the corner. The dog tried several times to come behind the handler to get back to the corner but the handler never took a step backwards to help. Eventually the dog chose another direction and wandered off track. When put back on the track, the dog completed the next three legs in about three minutes, never wavering from the track. This team will pass soon.

Weimaraner (M). Nice slow start routine and calm start. Down the first leg and a hard surface turn almost exactly on the corner. The next leg was a “teaser” of 215 meters. After 115 meters of hard surface the dog indicated the intermediate article that the handler happily held up for all to see. Continuing on the team transitioned back to vegetation. Nearing the second corner, they were faced with a man walking with a woman in a walker. The man and woman crossed their track and then turned to continue down the track in the direction the dog needed to go. The dog stopped, thought about it and turned left about 20 meters before the scheduled turn. Crossing a street, the dog paralleled the street and his track, avoiding the people and made his next corner. 50 meters later he turned right and crossed a street and took the handler down a slight hill to his final article. When he stopped at the article, we were ready to cheer, when the handler told the dog to “get back to work”. Two minutes and a ten meter circle later the dog dragged the handler back to the article!

Belgian Shepherd (B). This team had a better start than the day before and quickly raced off the start and down the first leg, stopping to spin around the handler every 10 or 15 meters. They overshot the first corner by a few meters and with the dog spinning around the handler managed to find the second leg. After 80 meters the dog spied several of the “Alberta Bunnies” known to frequent the tracks on the Campus and raced and spun in circles until I was forced to call them off for no longer working. This team has the desire and drive to pass but still need work on the fundamentals.

Weimaraner (B). Lovely down and calm start routine. Nice working drive as they marched down the first 112 meter leg, not slowing to step over a fallen tree from the storm that blocked the entire width of the first leg. Over the tree, across the grass, over a street and up a hill to a left turn. They made the turn exactly on the corner, worked down the leg, across another street, over a grass strip to their hard surface turn. Turning right within a meter of the plotted turn they proceeded 50 meters to the intermediate article. Restarting, they tracked an additional 50 meters of cement, transitioned to grass for an additional 38 meters. Turning left they were only 50 meters from  the end when the handler “started thinking”. The dog would have nothing to do with her thoughts and dragged her down the final 50 meters to the article.

The UTDX track was not run as the entrant passed on Saturday.