March 30, 2012 − by Leslie − in Conformation Articles, Training Articles − No Comments

Well, much as this has been a delicate subject over the past couple of years, it is with great pride I announce the first “natural tailed” Champion in the history of the breed in Canada! 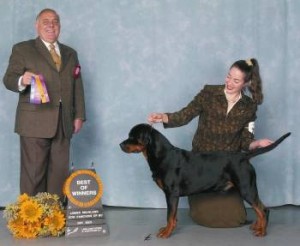 My young man, Fabius, became a Canadian Champion at 19 months of age, by finishing at the Tradex shows in Abbotsford BC in October of 2001. Fabius is formally known as USRC Select Youth Can./UCI-Int.Ch.Fabius Von Der Bleichstrasse, and was bred in Germany by Harald and Brigitte Menzemer. Fabius is the second dog I have owned from this kennel, the first being Fabius maternal uncle, Mako.

Perhaps the most frequently asked question on the subject is why? Why do I feel the need to show a tailed rottweiler in CKC conformation? For the same reason you show any dog, to evaluate your stock and compare him to others. I truly believed Fabius was capable of achieving his title. I trained, practiced and groomed him the same as I would any dog I was preparing to compete with. Fabius is very happy, his tail is always up and wagging all the time…he loves people, so I was determined to make this work for him in the ring. There is no way to hide the tail, especially on a dog that is always wagging it.

Next, I am generally asked what the judges thought of the tail? Well, most found it very different and quite arresting. Truly, a wagging natural tailed rottweiler presents a completely different image in a judge’s mind from the statuesque, aloof regality of the docked specimen. In truth, some liked it better, many were indifferent, and a few hated it. One judge actually asked the class “does anyone have a pair of shears?” Yes, she was joking, but not without a serious undertone. I smiled, thanked her kindly, and accepted my fourth placement with dignity. Showing is very subjective, I show because I love to be in the ring with my dogs. I suppose I just couldn’t resist showing Fabius too! 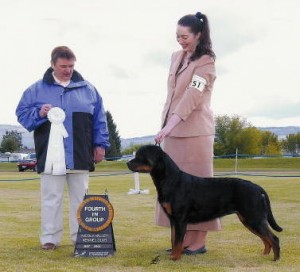 As a side note, if you are showing a tailed dog, show to every judge on a given weekend…yes, even those who do not like the tail or give you a hard time. When they come back and judge again, enter under them again and show with a smile on your face and be very courteous, regardless of the placement. You will be surprised, Fabius later won under several judges who originally were horrified by his tail. Why? Mainly, because it takes courage to follow a new path, but quality and respect win converts. There are many excellent, old time rottweiler judges who hate the idea of a natural tail, but they know a good dog when they see it.

Finally most folks ask about the tail itself. How did I present it, and what type of tail does Fabius have? Well, in presentation, I let Fabius do whatever he wanted with his tail in the ring. As I mentioned earlier, he is a very jovial dog, so most of the time the tail is wagging happily. Fabius tail hangs just to the point of his hock when at rest, it is thick at the base, and tapers slightly to the tip. Generally, the tail is an extension of the topline, but when Fabius is excited or feeling “macho” it can form a open “C” shape slightly above the horizontal line. When I pose him for photos, I sometimes hold the tail horizontally out behind him, mainly to showcase the tail, and prevent it from blending with the rest of his rear. One thing I should also mention is that I really practiced handling, pulling, and over examining the tail a lot. Everyone wants to touch it, including judges, so I specifically wanted an adult male rottie who would be very easy to examine closely. Fabius gentle nature and sunny disposition made this an easy task. 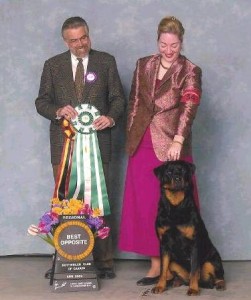 My advice to anyone who is interested in showing a natural rottweiler is to prepare the dog as you would a special. Train, groom and condition to the best of your abilities, and be sure the dog can withstand close scrutiny. Judges will take your entry seriously if you present him or her as such. Be sure the dog is of a quality that it could easily finish as a docked specimen. It is hard to finish a tailed dog. I have many, many reserves to show for my effort. Lastly, believe in yourself and your dog, others will too. FCI, CKC and AKC judges have recognized Fabius, further distinguishing himself as the first UCI-Best of Breed winning and Group placing tailed rottweiler, and the first tailed rottweiler to be shown in the AKC ring.

I wish all of you the best of luck!

And now for a couple of updates! On May 18, 2003 Can.Ch.Gina vom Hirschenbrunnen, HIC TT CGN – bred by Walter Kehrer and owner handled by Suzanne J. Eikanger-Stoops, became Canada’s first Best of Breed winning & Group placing tailed rottweiler. Gina is pictured above at only 13 months of age, achieving her win from the classes. Gina is Canada’s first “female” tailed champion, and the 2nd tailed champion in breed history, finishing on August 4, 2003 – at 15 months of age.

She is pictured below (2 days after her second birthday), at the Rottweiler Club of Canada B.C. Regional Specialty on April 11, 2004 – Gina became Canada’s first “Best Of Opposite Sex in Specialty” (BOSS) winning tailed rottweiler. My sincerest appreciation to our judges for recognizing “Gina”!

PS… Alan Stoops & Suzanne Eikanger-Stoops are sponsoring an ongoing award, in the form of a rosette for “Best Tailed Rottweiler” at any Specialty Show across Canada willing to offer it. Eligibility: in order to compete for the award, all tailed rottweilers must be entered/shown in the regular classes. Please contact Suzanne at stoops15@comcast.net if you would like a listing of upcoming events offering the award, or to request an award for your show.