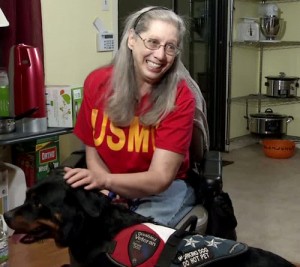 KNOXVILLE (WATE) – You’ve probably seen service dogs out and about helping the blind, an autistic child or someone in a wheelchair. One local veteran wants you to know these animals are much more than just companions.

Marine veteran Jan English considers her service dog Chayna an extension of her own body. In addition to fetching almost anything, Chayna also helps with chores around the house.

English left the Marines back in 1980 with nerve damage from physical training. She started using a wheelchair about 16 years ago and has had three smaller service dogs since then. When the last one died, she decided she needed a bigger animal.

“One big enough that I can hang on to and pull up on,” she said.

But she didn’t look for a traditional Labrador or Golden Retriever. Instead, English called a Rottweiler breeder in Georgia.

“I introduced myself, started crying and I told him what I needed it for. He called me back with her, a dog that was turned back to him because she wasn’t aggressive,” English said.

For English, it was love at first sight.

“I wanted to get up and crawl over and just cuddle with her,” she said.

Knoxville-area dog trainer Dameon Berry, who uses a wheelchair himself, taught Chayna everything she needed to know.

“It was really great because if I said I want her to turn lights on, it wasn’t why? Because he was in my shoes,” English said.

She said Chayna has changed her life.

“People are not aware of service dogs, the need we have for them,” she said. “She’s a lifesaver.”

While Chayna is not aggressive, you still can’t pet her if you see her out and about. She’s working and she can’t be distracted.