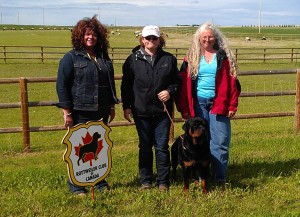 The RCC put on another great event this past weekend, in conjunction with the Australian Cattle Dog Club of Canada.  We hosted the RCC event on Saturday, June 16, 2012 out at Phantomridge Ranch, in Aldersyde, AB.

What great weather we had for our event that day.  Not too hot, not too cold.  We had a total of 21 runs in the morning trial and 21 runs in the afternoon trial.  This was an All Breed event and it was nicely represented by different breeds including Rottweilers.

I am pleased to say that the Rottweilers did a fantastic job.  Some had newbie handlers on them for the first time entering the herding arena and they did a great job.  Congratulations go out to Michelle Whistlecraft on her boy Duke who earned his Herding Tested title in 2 tries (although he entered all 4 trials and passed all 4, you only need 2 passes under two difference judges to get your title).  Duke is a very exhurberant boy out there.  You need some good running shoes on when handling him.  He listened well and was successful.

Michelle went in with her girl Crash and earned their Herding Started title.  This was Michelle’s first time taking Crash into Herding Started (which has alot more elements to remember and complete then HT or HT/PT in the states).  Michelle and Crash did a fantastic job and earned their title in 3 tries together.  She also earned High Scoring Rottweiler on the Saturday afternoon trial.  Super proud of them both for the job they did as a team.  Very nice to watch them work together and Michelle’s heart did not stop and she made it out alive ;-))

My girl, Edel, was successful as well.  She earned her Herding Started title in 3 straight tries (entered all 4 and passed all 4 trials).  She also earned three High Scoring Rottweiler and High Scoring Rottweiler Overall (for all 4 trials).  She had some beautiful runs that were in the mid 90’s.  We mastered the Y chute each time we had to deal with it (which proved to be a very tricky element for everyone during the weekend in all the levels).  Super proud of Ms. Edel as this is also a dog that only has 30% sight in her one eye.  Herding has built up her confidence and she is turning into an amazing herding dog in the making.

Shannon O’Briant also handled his boy Achilles in the afternoon trial. While they successfully completed all of the obsticles throughout the course and did not time out, they lost too many points in between the course to obtain a qualifying score but I have no doubt that they will get it next time.  They are a very new team together that will only get better.  So congrats to them both for just getting out there and trying it and seeing how they did.  Takes a lot of courage to try and attempt a started course when you are both new to herding.  They both remained calm during the entire run.

Billie Richardson handled a lovely Rottweiler by the name of Ransom.  Now here is a very nice dog to watch herd.  He has such natural balance.  The take pen proved too ominous for them in Started and while they tried very hard together as a team to get those sheep to settle down and for Ransom to want to take a step inside there, they just could not get the sheep to cooperate.  So on Sunday, Billie asked if Ransom could be in Tested and this was allowed because he did not qualify or have a leg yet in Started.  Well to watch them work in Tested was beautiful.  Nice team and I have no doubt that we will be seeing them in Started and mastering that take pen in no time flat.  I have a feeling that we will be hearing great things to come for this dynamic duo.  What a pleasure to watch them both go around the arena with such control and balance.  WOW!!!

There was another nice Rottweiler by the name of Khaos who was handled by his owner Rob Taylor.  The first trial on the Saturday was a new venture for both dog and handler.  And while the dog showed great keen and interest on his stock, his owner was feeling a little flustered so he called his run.  On Sunday, I am very pleased to say that this team improved 100% and with the help of the judge to coach the owner on where to be to help his dog (coaching is allowed in Tested but the judge cannot handle the dog, only the handler can do that), both Khaos and his owner were successful in getting their first leg of their Tested title.  They will finish that off next time.  Nice work by an up and coming team.

Although no titles for them at the trials, we wish to congratulate:

Well another successful herding trial is done and over with.  Always bittersweet as I love having the herding trials but they are alot of work to put on, organize, work and volunteer at.  The RCC will be co-hosting another trial next year with the Corgi club in conjunction with their nationals.  Hopefully there will be new Rottweilers out there willing to try their “paw” at herding.

If any of you ever get the time to get out and watch a herding trial, you definitely should.  Check out your local areas for places you might be able to go and try herding at or attend an HIC in your area.  If you ever need assistance in finding a place in your area, send me an email, I know a few places across Canada that offer herding lessons etc. 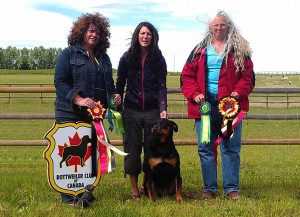 Last but not least, I wish to thank my volunteers, you were awesome.  Thank you to Marina Skoreiko who came all the way down from Edmonton with her new puppy Tye to help out on Saturday at the RCC trial.  We also got to try her little girl out on sheep on Saturday evening.  There is a herding dog in the making there!!  She was a super star.  Thank you to Billie Richardson, Shannon O’Briant, Christine Taylor, Judith Snowdon, Gerri-Lynn Kucy for all your help behind the scenes and with timing, scribing etc. Thank you very much to our course director Jerry Kurbatoff.  You did an awesome job and although at times I am sure you wanted to pull your hair out, you held it together and smiled during it all.  Thank you to thank Michelle Whistlecraft for all her help in assisting me in the secretary duties for the trials.  You were a God send with respect to photocopying the trial scoresheets and helping with timing when needed etc and any other things that needed taken care of including clean up and set up. Thank you to our returning judges Shelley Fritzke and Barb Davenport and thank you to our stock handler Louanne Twa.  The sheep were awesome.