April 09, 2011 − by Leslie − in Rottweiler Health Resources, Uncategorized − No Comments 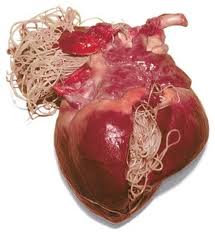 Heartworms have been common in the south eastern coastal states for more than 50 years. During the last 20 they have become a real threat to our Rottweilers. They have slowly spread inland from the East coast and now few states, if any, are free from heartworms. Hundreds of dogs die every year from this insidious deadly parasite.

The heartworm depends on both the dog and the mosquito in order for it to continue. Adult heartworms are found in the right ventrical of the heart and adjacent vessels. The larvae produced from the adult female heartworm is called microfilaria. These microscopic creatures will circulate through your dog’s blood vessels until a feeding mosquito ingests them. Once inside the host mosquito, the microfilaria will develop into its second and third stages. This takes about 2 to 3 weeks. It is at the third stage, when the mosquito bites your Rottie or someone elses dog, the larvae is then deposited back into the unfortunate canine. Next the larvae moves to the fat or muscle cells underneath the skin where they then molt and again make a transformation a fourth and fifth time.

Because most heartworms are very slow in maturing, your Rottweiler may not exhibit signs of the infestation until it is already in the advanced stages. Symptoms could be coughing, loss of appetite, difficulty breathing while exercising and possible general lethargy. At times signs can include vomiting, diarrhea, and possible jaundice (where normal pink parts of a dog’s gums and eyes appear yellow). Once these signs are present, however, the heartworm disease is usually so advanced that successful treatment is greatly reduced. Never wait more than a couple of days if you notice any of the above symptoms in your Rottie.

There is another form of heartworm disease that is even more serious than the one already mentioned. It is called post caval syndrome. Dogs that have developed this syndrome will often have severe breathing difficulty by the time a veterinarian sees them. Their jugular veins will pulse with every heartbeat. For a dog with post caval syndrome to survive it should have immediate surgical removal of as many of the worms as possible directly through the jugular vein. The means of diagnosis is via a blood test. Once it has been determined your Rottie is free of any deadly heartworms he/she can be placed on a preventative treatment. Giving a dog preventatives that is already infected with heartworms can produce serious problems. There are different ways to administer preventives, some that must be given daily and others monthly. Be sure to discuss this with your local veterinarian, but above all be sure to qet your Rottweiler tested and on a preventative treatment. This is a case where really an ounce of prevention, even if daily, will prevent what could be disaster for your best friend. Treatment of heartworm disease is not only expensive, but very dangerous to your dog. More and more veterinarians across the country are recommendinq that all dogs be kept on heartworm preventative year round.