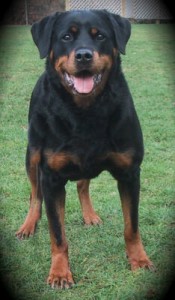 Dixi was born in 1994 and lives in the Vancouver, BC area with her owner, Inge Georgi. Without question, Dixi is the best working rottweiler Canada has ever seen and has proven it is possible for a rottweiler to have both V conformation and incredible working ability.

Dixi’s show accomplishments while being handled by Suzanne Eikanger-Stoops are: 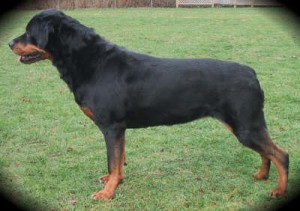 Dixi was retired at age 7.

Dixi trained at the West Coast Schutzhund Club. Inge would like to give credit to Lance Collins who did all the helper work on Dixi and to Pat Brown-John for her help in polishing obedience to a National level.

The following is quoted by Lance Collins:

“Dixi is extremely friendly, outgoing, stable and very expressive. She is very confident and very sure around people. She was always pronounced in protection. Inge and Dixi made a very harmonious team, worked very well together and people were always impressed with the performance of the team. The dog has a lot of personality. She was a fun dog as she always did interesting things and made people laugh. Inge and Dixi competed often and always made a very good presentation.

I remember watching Dixi at the GSSCC Regionals two years ago. I was standing beside two helpers who were discussing Dixi. They asked if someone should warn the trial helper what catching Dixi was like. One helper said to the other “nah…..let him find out for himself” and then they laughed. They said catching Dixi was like catching 90 lbs of cement on the sleeve. She gripped and then just hung. Was just about impossible to drive. The trial helper was a big guy. About 6′. The expression on the helper’s face was priceless when he caught Dixi. It was easy to see that catching Dixi was a whole lot different than catching a shepherd. It was all the helper could do to drive Dixi and he just about fell a couple of times trying to drive her. Dixi made all the spectators laugh when this happened. A rule on the schutzhund field is that if a helper falls…..well….the helper has to buy a drink for everyone at the field. Costly at a Regional event with the number of spectators. I have never seen a rottweiler as good in protection as Dixi was….and….she is just a little female 😉 She was very consistent and reliable in tracking, obedience and protection. I had the opportunity to watch Dixi do some obedience in February 2003 and she also got a grip on the sleeve. She does not realize she is old now; it is easy to see she loves the training and protection field. She is still high-drive at 9 years of age. A truly special girl and is a wonderful ambassador for the rottweiler breed.