Competing in Agility with Your Rottweiler

Agility is the fastest growing sport in dogs today.  This article is the first in a series of agility articles which will introduce you to the sport and take you from beginning training to entering a trial.  I’ll give you the concepts; the actual training is up to you. 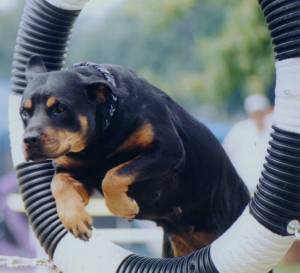 The sport of dog agility began in 1977 when the Crufts dog show needed a time-filler between the morning conformation show and the afternoon obedience championships.  The founders based dog agility on horse jumping and the dogs ran in teams.  It was an instant crowd pleaser and the sport swept Europe, Australia and New Zealand.  The United States embraced the sport in 1986 and, in 1988, agility came to Canada.

In modern day agility trials, the dog and handler team combine training, teamwork and athletic ability to negotiate obstacles under set time constraints.  Dogs are divided into height divisions, so as only to directly compete with like-sized dogs.  They are also divided into levels of performance, ie. Novice/Starters, Open/Advanced, Masters etc.  Much like obedience, exhibits are judged based on personal performance and are working toward a qualifying score.   Unlike obedience, though, agility exhibitors may use both verbal commands and body language at any time and may talk to their dog or cheer their dog on during the run.  Accuracy of the performance is judged, as well as running time.   Placements are given first through fourth place with score determining the winners.  Ties are determined by next comparing running times.

Standard equipment in most agility trials are as follows: bar and spread jumps, open and closed tunnels, A-frame, Teeter, Dog Walk, Weave Poles, Table or Pause Box, and window or tire jumps.  A combination of these obstacles will be used on any agility course and each organization has it’s own rules for obstacle use.  The A-frame, Teeter and Dog Walk are considered “contact” obstacles.  The dog must touch the yellow area of these obstacles at least on the “down” side.  Contact obstacles teach control and help to promote the dog’s safe navigation of the obstacle.  The Table and Pause Box are set in the course to stop the dog.  The dog will enter the obstacle, sit or down, and wait for the command to exit the obstacle.  Weave Poles are generally the most difficult obstacle to train and are used in Novice courses in only two organizations.

Several organizations sanction agility trials.  Two of the most commonly seen in Canada are the Agility Association of Canada (AAC) and the North American Dog Agility Council (NADAC).  Both the AAC and NADAC are open to all breeds as well as mixed breeds.   Recently, the Canadian Kennel Club (CKC) began to sanction trials as well.  Canadian Kennel Club trials are open only to CKC registered dogs.   In the States, the American Kennel Club (AKC), the United Kennel Club (UKC), the United States Dog Agility Association (USDAA) and NADAC all hold trials regularly.

Each organization has it’s own set of rules. Jump heights, obstacle use, course times and faults will differ from one organization to another.  Additionally, each organization requires that the dog be registered with them before being allowed to compete.    And, in most organizations, your dog must be officially measured by their representatives.    In addition to the standard courses, some organizations offer jumpers, games and teams courses.  Each has a website and can furnish rules and regulations for a nominal fee.
Agility training can be done successfully with both young and older dogs, in fact, many find that it is a wonderful sport for that retired obedience dog or for a puppy that’s not quite ready to enter the show ring.  In either case, always remember that the safety of your dog is the number one concern.   Training in agility strengthens the dog/handler bond, increases off-lead control, and builds confidence in most dogs.  To start, all you need is a dog that is in good physical condition and has a desire to please.  Most agility training is done using motivational methods.  Bring lots of treats and be prepared to have fun! 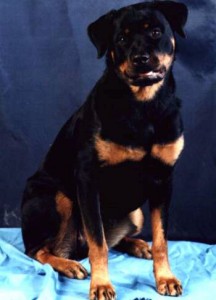 elly started Agility in 1992 with a little club in Edmonton on the Base where we lived.  I guess you could say she found her calling in life. She loved it and took right to the training, she would jump anything and go through and over anything. At 105 lbs and 26.5 inches tall she was jumping 35 inch with no problems.  Her first trial for Agility came in 1994 and she was ready..that weekend she received her Novice in NADAC.  We wanted to make a name for the Rottweiler and a good one at that. We ask the NADAC if another Rottweiler had ever received a agility title in Canada with them and they say she is a first so we where geared to do more with her. She went on in life to get her titles in Open, Gamblers and Jumpers with NADAC.  She has also received her Starters with AAC. She was a agility dog through and through her last year before her death (earlier in the year) we took her to a agility fun match in Ontario, she would not sit still till she ran the course. So we entered her and she took 2nd over six other dogs….they where every surprised to learn her age after she ran the course.