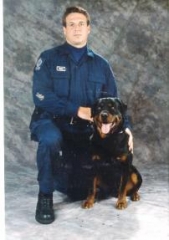 At 11:30am on Wednesday 23 June, 1998, Constable Randy Goss and PSD Caesar were among officers who responded to a call about a 20-year old man who was armed with a shotgun and firing off rounds in his backyard. When police confronted the man and ordered him to drop his weapon, he pointed his shotgun at them and stated that he wanted to commit suicide. Officers then called for the Emergency Task Force to assist them, and backed off to await their arrival.

While they waited, the man fired off more rounds before making his way into a field that backed onto three schools where students were celebrating the end of the school year with an outdoor play day. He then pointed his gun at a group of teens before firing more shots into the air.

Officers on scene decided that the man had to be stopped before he got any closer to the students. When the man turned his back on police to walk towards the school, Constable Goss sent Caesar to take him down. But as Caesar closed in on him, the man suddenly turned and shot him point blank in the face before turning his gun on police. Officers immediately fired, wounding the man, and placed him under arrest. Caesar was rushed to the vet clinic in a police cruiser, but it was too late – he had been killed instantly.

The six-year old Rottweiler had been raised by Constable Goss from the age of 10-weeks, and the pair had been constant companions. They were a popular attraction when they visited local schools, where Caesar would entertain students by barking twice in response to the question: “What’s one plus one?”

The outpouring of grief for the fallen police dog was unprecedented. The next day, schoolchildren bearing flowers and condolences flocked to the police kennels, where the flag had been lowered to half mast. A card made by one ofhe students read: “We are very

Caesar was the fourth Edmonton Police Service Dog to be killed in the line of duty. A public memorial service was held to honour his life, and thousands of dollars were donated to a fund in Caesar’s memory. In 1999, Caesar was inducted into the Purina Animal Hall of Fame.

Goss returned to work, eventually becoming the sergeant in charge of the Edmonton Police Canine Unit. On June 20, 2007, at the unveiling of the Canadian Police Service Dog National Monument, Sergeant Goss presented a cheque for $6000 from the proceeds of Caesar’s memorial fund – a donation in support of the monument, on behalf of the citizens of Edmonton.