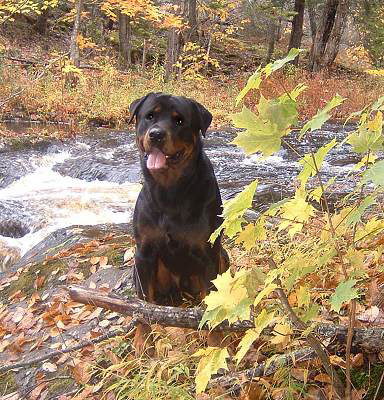 My name is Jacquelin Robson and I have been involved in rottweilers for over 20 years. I live on a rural property in Southwestern Ontario with my 2 children and seven rotties.

I can still remember the first rottie I met 1984. I had just started my new profession as a veterinary technologist after graduating from St Lawrence College in Kingston, Ontario. The large boy was in the animal hospital for surgery to help reduce the pain from his severe hip dysplasia. He was a well-tempered male and from that day forward I knew that rottweilers were the breed for me.

After buying a small farm it was time for my first rottie; MiMI, she was a rescue, poor girl had been abandoned at a local boarding facility and was brought to the local vets to be euthanized. My friend happened to be there and stated that he knew someone that would give her a loving home thus my addiction began.

I acquired my registered kennel name “Windorff” in 1993 and have been breeding Rottweilers under that kennel name ever since. I have shown in the CKC and the  UKC  conformation shows, German style Seiger shows and done a limited amount of obedience handling.

My hope in filling the ON & QC director’s position is to facilitate more involvement from the Rottweiler owners in RCC from the region.