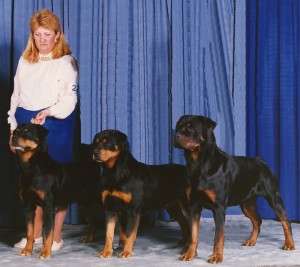 I started competing in obedience in 1974, with a Springer Spaniel named Kyla, who went to #4 Top Sporting Dog. I then started showing and breeding English Cockers in 1976. Besides my own dogs I also showed the dogs of All Breed International Judge and English Cocker Breeder, Eugene Phoa. I obtained my first Rottweiler in 1978. Ch Hallenhof’s Gentleman Bayre CDX.

After great success showing Bayre and his mom, we started competing in obedience and expanded our breeding program to include the Rottweilers. Our very first show, with our very first litter was under noted Judge Muriel Freeman. She was more than generous with her advice and knowledge of the breed. We took RWM, BP, WF, RWF, Brace, and Stud Dog. We went on to continued success with our litters and our dogs.

Bayre sired some of the top dogs of the time, and his son Griffen, paved the way for a lot of top wins for other dogs, being the first Rottweiler in Canada to crack the Top Ten Working Dogs. His other son, my babe… Garth, was a true working Rottweiler. He spent much of his youth as a working cattle dog, did agility, weight pull, carting, obedience, conformation, school visits, and hospital visits. As a producer he sired many conformation and obedience titled offspring as well as four top females in Canada, from four different dams. He also proved his worth as a guard dog on a number of occasions. His granddaughter Ch Kyladie’s Trylby, also went onto make her mark in the Rottweiler world, with her unprecedented number of group placings and a huge Best in Show, over 800 dogs, she was a joy to show. Trylby also starred in a number of TV programs and made a commercial with the famous Don Cherry. As a producer, a remarkable number of her kids became champions (over 80%)….. including one litter of 6 which all obtained their championships and a number obedience titles. Over the years Kyladie has obtained upwards of 55 champions with some 135 titles between them.

I spent a number of years training all levels of obedience privately and for an All Breed Club. I also held a variety of positions in an All Breed club. My showing and breeding took a hiatus, due to the commitment I gave my parents to be their primary caregiver. This commitment lasted longer than expected and as a result I have curtailed a lot of my showing and competing activities, but still maintain an active interest in my pups and their achievements.

RCC History: Was instrumental in the club in the late 70?s early 80?s. Held a number of positions, and hosted two National Specialties. I also worked on the new constitution and the new standard.

Personal: British background, came to Canada in 1969. I have two daughters, one of which was very involved in the dogs and showing. I am involved in the Rugby community, as are most of my family. University educated with additional education in graphics, advertising and marketing, political science, and “genetics for the everyman” courses.

My husband Gordon had never owned dogs before meeting me and was immediately drawn in by our last two dogs, and has become a big fan.