Adopting a Rottweiler from a Shelter or Rescue Group 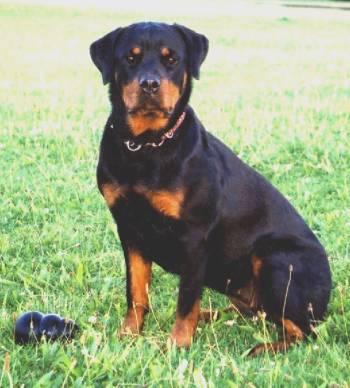 We adopted a great Rottweiler from an SPCA shelter, and I’m proud that we did. In the past few months as ‘parents’ of Alice, we have learned a lot about our dog, and also about Rottweilers as a breed. I hope that some of what we’ve learned may help others to choose a dog in need of a good home.

Part one – The Adoption:

It started when Nicole had become quite fond of a particular female Rottweiler with no name while volunteering at a local SPCA. Apparently, the dog was was a stray, was suspected to be around 2 years old and may have had a litter of puppies. She wasn’t in the greatest shape, and she was recovering from a dual operation – spaying and eyelid surgery. On top of that, she had considerable thinning of patches of her hair from either flea infestation or from having puppies.

I have to admit I was a bit apprehensive at first. Although we were both raised with large dogs, and we’re both experienced in dog care, we had no experience with Rottweilers. I was a little worried that the dog might turn out to be aggressive or unmanageable, but I didn’t want to judge the dog before I met her.

Nicole took me to meet Rottweiler together one Saturday morning in April. The shelter was noisy and full of activity, with some dogs literally jumping off the walls. Amidst the chaos, the quiet-looking Rottweiler looked at us calmly as we approached. Between the stitches in her eyelid, the shaved tummy and the patchy hair on her hindquarters, she appeared to be a mess, but her eyes were bright, and she was responsive to our presence.

When we took her out for a walk, she preferred to walk beside us, without lunging or pulling excessively, and would often look up to see what we were doing. All in all, she seemed to exude a sense of calmness and sweetness that I didn’t really expect. She very much liked being petted, and was quite gentle. At the same time, however, it was apparent that there was a spark in her eyes. Could it be that we found a diamond in the rough?

That same Saturday morning, we adopted the Rottweiler, named her Alice and took her home. She was generally quite well behaved, but she ‘growled’ once or twice while being handled. That night, after a long and thorough bath, which she seemed to enjoy, Alice slept soundly on the floor at the side of the bed. She didn’t seem too interested in food, so we didn’t force any on her (although it was available). Instead, she seemed to just want to be close and quiet. The next morning, she seemed a little perkier than the day before, and seemed a little more enthusiastic about food. This trend would continue.

In the beginning, Alice was mostly cautious and tentative about new things. She would explore with a little encouragement, but wouldn’t bound aimlessly into an unfamiliar situation. Later, she became more comfortable and confident and, her considerable playful side became more apparent. One bonus was that Alice was very good with other dogs – to this day, she hasn’t shown aggression towards another approaching dog. If anything, she was usually over-eager to play, with anything involving a ball being her favorite.

With the new surroundings, it’s perhaps not too surprising that Alice had a few ‘mistakes’ at first. Once we got used to her signals, and once she developed a daily routine, however, she managed to reliably do all her business outside.

We did learn two lessons the hard way. The first is that a Rottweiler has lots of energy, and if it’s not burned off through exercise, they’re going to find some other way to do it if left alone. Alice has chewed holes in a couple of blankets, some carpet, and has even managed to rip a pizza-sized piece of linoleum off the floor. Now we’re sure to have an extra-large Kong (or other extra-large chew toy) around for her to work on. To supplement the vigorous exercise that Alice usually gets, we make occasional use of a doggy day-care when the weather is really bad or our schedules are very busy.

The second lesson is that Alice has a sensitive stomach – which may or may not be a breed-dependent thing. She’s had two bouts of the runs and losing weight. The first was when she decided to eat some dirt out of a flower pot, and subsequently led to vomiting for a day, and the runs for three or four days. A trip to the veterinarian – and some expensive diagnostic tests – led to a temporary change to a ‘gastro’ type food, as well as some other gastro medicines. The second bout occurred when she was fed about half a McDonald’s hamburger and fries by a friend of the family. This bout was shorter and less severe, but was a clear lesson that ‘people’ food wouldn’t be allowed as snacks for Alice.

We’ve found that Alice seems to digest her food best if it’s served twice a day, rather than once. She’s currently on a commercial dry lamb and rice blend, and seems to be doing quite well on it. Her coat is good, and she’s at a healthy strong weight (around 85 lbs). For snacks, aside from the very occasional bit of cheese or meat, she’s only allowed to have doggie treats.

For the first month Alice was pretty quiet – most of her energy was being devoted to recovery. Once her digestive issues were sorted out, she began to gain weight and strength. The patchy bits on her coat were filled in with glossy black, and her surgical scars healed.

At first during walks, Alice was slow and became tired somewhat easily. Her ‘spark’ to play was definitely evident, but her body couldn’t keep up with her spirit. She was very tentative, and would be hesitant to explore without strong encouragement. We’d even have to lift her into the back of my truck (with a canopy – of course). However, with daily walks, and hikes on weekends, Alice’s strength and endurance quickly developed. Now, a two-hour hike up a mountain is easy for her – we tire out before she does. Her gait is tighter and stronger than it was before, and she can run much faster. In fact, after eight months, I think she’s still getting stronger and faster.

During her road to health, Alice maintained the core sense of gentleness that I saw from her at the shelter. Sure, she’d wrestle and run with sticks and be a rambunctious young dog while out for walks or during playtime, but she’s also a softie who wants to get on the couch and lay across on your lap. She’s also very vocal – and will have a groan, growl or whine for pretty much every mood that she has. At first, the noises were disconcerting, but now we realize it’s just Alice making noise.

Perhaps the most satisfying aspect of Alice’s new health is her developing personality. The somewhat quiet shyness is giving way to a self-assured confidence. She isn’t timid in meeting other dogs, and is always willing to play. At home, she is becoming confident and pushy. If she wants something, she will make it quite clear to us. On walks through forest trails, she can be trusted to run off-leash, and she seems to relish the task of ‘scouting’ the trail for us. Recently, she’s taken up swimming (with encouragement) and we’re not sure what she’ll tackle next. One thing is for sure: every day, she’ll make us smile and laugh.

Printed in the Fall 2002 Issue of Rottweilers in Canada

Pictured above is Alice.

*Editor’s Note: If Alice’s personality is as nice as her looks, Jason and Nicole should surely be proud to own her.