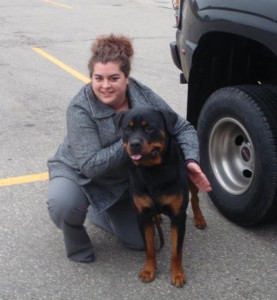 The Rottweiler Club of Canada is very pleased to share some news with you! As you know one of our goals in the club is to protect & maintain our breed here in Canada. We strive to work for all Rottweiler enthusiasts, whether you are a pet owner, a breeder, a rescuer or just a Rottweiler lover!

This past summer it was brought to our attention that a well-known American judge, Mrs. Cris Walkowicz had a judging assignment at the Erie Shores Kennel Club shows in Ontario. On the day that Mrs. Walkowicz judged Rottweilers, all of the dogs entered had natural undocked tails. Unfortunately, this judge refused to award Winners, Best of Opposite or Best of Breed and stated directly to the exhibitors that she was unaware of our national breed club having made a change to the standard with regards to docking vs. natural tails. Even though the judge was advised about the current standard, she refused to give the awards. The exhibitors of the would-be winners approached the Erie Shores club executive in an attempt to complain but were brushed off and told to take the matter up with the Canadian Kennel Club directly.When the RCC heard about this incident we immediately took action. Our standard here in Canada had previously mentioned “normally docked” tails but changed its wording to specifically clarify our stance on natural tails in 2006. No matter the tail, we are proud of all of our dogs! On behalf of the Club, our members and those exhibitors & their dogs we filed action with the Canadian Kennel Club against both the judge and the Erie Shores Kennel Club. In December, RCC President Laura Grandmont went to the CKC offices to present our evidence before the Discipline committee. We are very proud to announce that the committee found in our Club’s favour. They found the judge was wrong and the club was wrong and penalized them both.

Mrs. Cris Walkowicz’s judging privileges in Canada have now been suspended for a period of ONE year to commence on January 8th, 2013. She may not judge any events held under CKC rules. In addition, Mrs. Walkowicz must reimburse the Discipline committee for the costs of the hearing in the amount of $400. The Discipline Committee has directed that the Erie Shores Kennel Club be reprimanded and the costs of the hearing be levied against them in the amount of $452. The judge and the club do have the option to appeal, however should the matter arise; we are prepared to continue with our stand on this very important matter. We would like to give a special thank you to Tim & Diane Trowbridge and Jennifer Bittner, the exhibitors who stood up for their dogs and the standard here in Canada. Without them we would not have been made aware of this serious situation. They provided us with detailed statements to assist in these complaints. As well, the Trowbridges travelled to the CKC offices to testify at the Discipline hearing.

We are a proud group and we will always stand to help anyone who needs us in this breed. Today is a fantastic day for all of those within this wonderful breed here in Canada. Whether you have tailed dogs or docked dogs, this shows that as a group we can stand up for our rights & the rights of our dogs. As a team we can do anything!

In our excitement from the good news posted yesterday I must add a very BIG heartfelt thank you. To Gwen and Marina, our amazing treasurer and vice president; without your tireless work, research and the heart you put into this, we would not have been able to do this. These ladies are an amazing part of the RCC team and their passion for the breed is second to none!